Shaun Gladwell's 'Yokohama linework' (2005) traces the path of the artist as he rides his skateboard through the streets of Japan. The work presents a minimal aesthetic, which strongly references abstraction and the process of drawing, fusing these formal elements with ideas relating to the urban experience such as Baudelaire's notion of the flaneur and the Situationists technique of derive: theories of 'strolling' or 'drifting' (respectively) through the environment to affect a more pure experience. By tracing the existing 'drawing' of the street, Gladwell has stated that he was attempting to "perform an experimental drawing or tracing in which I was both drawing and being drawn by road markings." By using the skateboard as his method of transport, the artist poetically links contemporary street culture with these complex notions of time, form, space and experience.

This work was commissioned for the 2005 Yokohama Triennale. The work is sold with a video still by Shaun Gladwell. The work is number 1 from an edition of 4 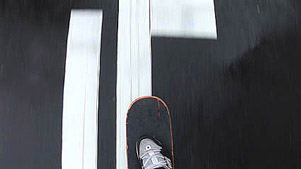