Louise Hearman's moody and uncanny landscapes embrace the transformative power of darkness, summoning the sense of danger that is often associated with the rural Australian landscape. In 'Untitled 454' (1996), what appears to be a deep swimming pool occupies the foreground of the image, with one single splash punctuating the water to suggest the presence of a mysterious unseen inhabitant. In the background, dark trees are overshadowed by suggestive storm clouds that add to the atmosphere of foreboding and sense of uncertainty. The surreal yet beautiful landscape appears to rise from the deep shadows of the subconscious, to which the viewer is both drawn to and fearful of. 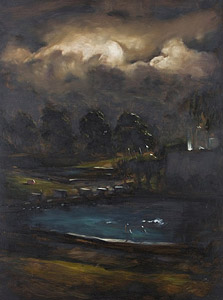