Provenance
A gift from the artist, circa 1976 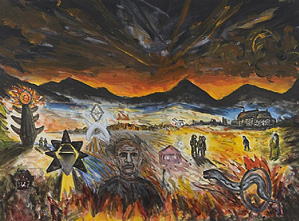 ☆ Add to wishlist
Born in 1940 in Sheffield, England, Peter Booth began drawing at the Sheffield College of Art while working as a copyboy for a local newspaper. He emigrated to Australia in 1958 and has lived and worked in Melbourne ever since. He was admitted to the National Gallery of Victoria’s Gallery School after impressing its director, John Brack.

Influenced by the industrial Northern England landscape in which he spent his early years as a labourer, Booth became known for hard-edge abstract works, which over time became dominated by heavy blacks. While blacks and dark colours continue to predominate in his works, he began depicting human figures in the landscape in works that are emotionally intense and which hold complex underlying narratives.

Highly literary in its inspiration, Booth draws from great Russian authors like Tolstoy and Dostoyevsky as well as Latin American magic realists like Gabriel Garcia Marquez and Jorge Luis Borges. Drawing has been fundamental to his practice since childhood, as has a dream journal that he has kept since 1973. From 1969-75 he worked in the Prints and Drawings department of the National Gallery of Victoria where the bizarre and frightening works of William Blake and Francisco Goya made a profound impact.

Peter Booth has exhibited for over five decades. He was part of the National Gallery of Victoria’s inaugural exhibition in 1968, The Field and was chosen in 1982 to show at the Australian Pavilion of the Venice Biennale alongside Rosalie Gascoigne. Major solo exhibitions include Project 12: Peter Booth, Art Gallery of New South Wales, Sydney, and the major retrospective, Peter Booth: Human/Nature, Retrospective, National Gallery of Victoria, Melbourne, 2003. His work is held in all major national and state galleries across Australia, and in the Metropolitan Museum of Art, New York, the Museum of Modern Art, New York, and the Centro Cultural/Arte Contemporáneo, Mexico City.