'Mothra' (2005) is a large scale black and white oil painting from Susan Norrie’s 'Godzilla Series' (2005) inspired by the 1964 Japanese cult film 'Godzilla vs Mothra'. One of only a small group of paintings on this theme, for Norrie, the 'Godzilla Series' is her visual interpretation of our present environmental situation. Depicting the mutant reptile Godzilla in battle with the giant winged insect Mothra. The work focuses on the apocalyptic event and aftermath of the atomic bomb, investigating the monstrousness of human-made disasters and the destruction and violence of both people and nature. The painting is stripped of much of its detail and rendered in shadowy tones of black and grey. As Mothra emerges from the dystopic murky haze of environmental devastation, she engages in battle with Godzilla in an attempt to protect the earth from ultimate destruction. 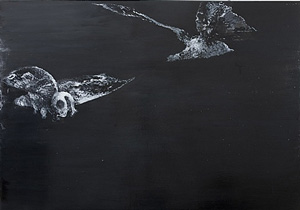