Provenance
Roslyn Oxley9 Gallery, Sydney
Acquired from the above in 2001

Missing out on an Olympic medal by being fourth would be the greatest disappointment for any Olympian - worse than being last. After some interest in Tracey Moffatt being the official photographer for the 2000 Sydney Olympics, she ended up watching it all on her television. As she noted, it was quite difficult to capture the disappointment of those who came fourth, as the focus is always on the winners. In an amazing series of emotional upheaval, real companionship and disillusionment, this image displays how one wrong move, can alter your dreams and life.

As Moffatt says "I photographed Fourth directly off the television screen. I had people in three different countries record the entire 2000 Olympics and send me the tapes (30 of them) which I scanned for fourth place athletes. It was so hard to find them because the camera, of course, only focuses on the winners." (http://www.artkrush.com/169759) 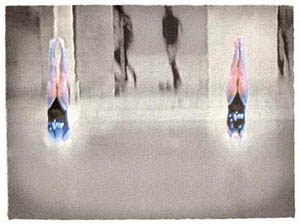 Copyright courtesy of the artist and Roslyn Oxley9 Gallery, Sydney