Provenance
Gallery 4a, Sydney
Acquired from the above by the present owner in 2002

Floating on a backdrop of ethereal colour and Aboriginal dots is a cross-cultural amalgamation of symbols, an equation that forms the collaborative body of work by Tim Johnson and My Le Thi. Born from Johnson's fascination with and study of other cultures this painting demonstrates Johnson's solid knowledge of Aboriginal culture (he was granted permission to use the Aboriginal dot sequencing in the early eighties) and his search for philosophic answers in eastern spirituality.

In his artistic partnership with My Le Thi these attributes are enhanced, as a fascinating combination of cultural symbology and spiritual synthesis produces a meditative work of cosmic proportions that somehow remain bound to earth. Since the early eighties, Johnson has been interested in Buddhist culture and been open to the possibilities of non-western traditions. My Le Thi's birthplace, the highlands of Central Vietnam inform her descriptive style. The cross-cultural dialogue of these two artists accentuates both the differences and similarities of multiple belief structures. 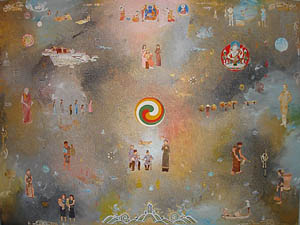