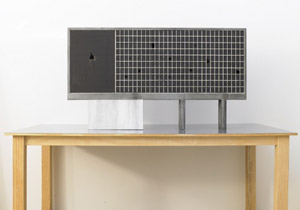 ☆ Add to wishlist
Morton's work confronts the architectural space in modern society. While Morton predominantly uses architectural framing as his subject matter, the concepts and ideas are less about the architectural artefact and more to do with what exists behind the framework of cities - the darkness, uncertainty and unknown. Where the slickness of building, advancing designs and the technological expanse of our fast-growing cities could indicate a busy, bustling overload, Morton's style is one of calm. The calmness comes from the possibility of the uninhabited architectural space and it is this space - the one between and within the building walls that the subject of Morton's works really inhabit.

Morton was born in 1965 in Montreal, Canada, and studied Architecture and Urban Planning at RMIT, Melbourne, before transferring to the studying art at Victorian College of the Arts in the late 1980s.