'Remember' (2004) is an intimate black and white gouache painting from Susan Norrie's 'Dorothy series' inspired by the classic 1939 film 'The Wizard of Oz'. Although Norrie is now well known for her mutli-media practice, she originally trained as a painter at the National Art School, Sydney and the National Gallery School, Melbourne. The artist's signature practice produces a tension between surface appearance and what lies beneath; beauty and terror, hope and disaster, serenity and unease. 'The Wizard of Oz' is a film of such contradictions - a children's fantasy with darker undertones.

In 'Remember' Norrie turns her attention to the scene in which Dorothy is welcomed to Munchkin Land by three representatives of the Lullaby League. Stripping the scene of the bright, saturated colour that characterises the film's depiction of the land of Oz, Norrie instead employs a monochromatic palette of greys. The artist's pronounced brushstrokes serve to further abstract the image, rendering the iconic source material curiously unfamiliar. 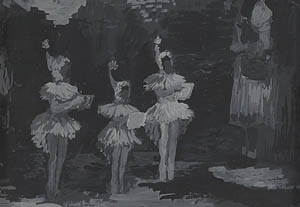