Provenance
Grantpirrie, Sydney
Private collection from 2008 and thence by descent


In 2007, Ben Quilty painted a number of large-scale portraits of his newborn son, Joe. These works were considered a departure for Quilty from subjects that, in the artist’s own words, were “about young men looking for initiation” – cars, drugs, skulls and other explorations of masculinity. Becoming a father for the first tme, Quilty had to reconcile fatherhood with manhood, a new parental responsibility set against the irresponsibility of youth.

As then Senior Curator of the National Portrait Gallery Michael Desmond wrote in 2007, “The images of Joe, like all the portrait heads in the exhibition, possess an imposing aspect that both disturbs and challenges viewers’ preconceptions, an effect derived from their monumental scale and the dialogue between paint and what is painted.”

Quilty continued to paint young male babies on the same grand scale in the years that followed. This work, of a boy named Jude, uses the same broad, thick brushstrokes as the Joe paintings, depicting the young boy with his first teeth exposed in the middle of a crying fit. Quilty has omitted the boy’s body, leaving his head to float on the canvas. The top of his head is cropped, filling the canvas and giving an extra sense of overwhelming scale to the viewer. Quilty’s capturing of this moment of distress for the young boy in turn captures the distress of the new parent and the weight that this responsibility entails. 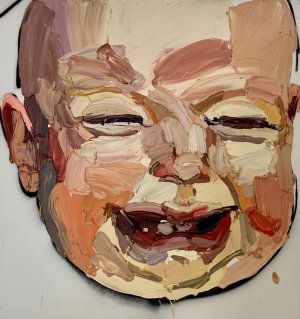