“Opus 139…[is] constructed within the concavity of oval or circular discs. Unlike Opus  105, the forerunner of all the disc reliefs, Opus 139 was painted. The basic disc was an old steel television tubs case cut back with a cutting torch. Again, the approximate centre has been established by a small ring from which a spiral coils out and establishes the principal motif, for it is from this spring-like device that all the other shapes evolve in a petaloid sequence that has not entirely discarded a glancing reference to the machine.” (Gleeson, Robert Klippel pp. 236 and 238.) 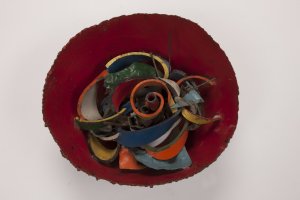