“Briefly, in 1974, Klippel turned his attention to wood. Among the stacks of unlikely material he had bower-birded in his studios to await the moment of insight that would propel them into sculpture, were boxes of coloured wooden toys, made in
Germany as simple construction sets for children. The shapes were grooved so that they could be slotted together to form diagrammatic people, heads, dolls or cars. The moment of insight arrived when, in the midst of making the complex
simplicities of his coloured ‘template’ drawings and collages, he suddenly realised that he could achieve a comparable effect in sculpture by using the basic geometry of the coloured toys. Opus 309Aa, c, c and c were the result. Pinches of wax helped to hold the pieces in place. At first he thought to repaint them and began sanding back their bright surfaces before deciding to allow them to be what they were.” 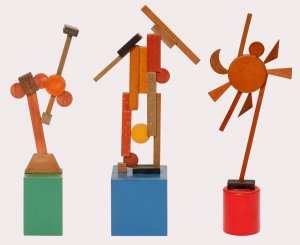 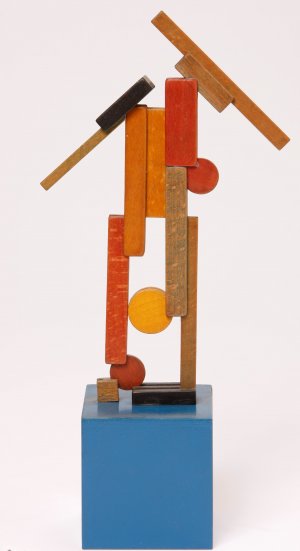