“During the 1950s Plate’s subjects were very often taken
from the animal world – insects, fish, birds and horses predominate and provide
a vehicle through which complete abstraction is explored and finally fully
attained in Study of 1957...


The partial abstraction implicit in Trouble at the Barrier leads to an almost total disintegration of
form in Yearling and culminates in Study of 1957, where reference to any subject
is deliberately and purposefully avoided.” (Anne Watson, Project 22, Carl Plate 1909-77, Art
Gallery of New South Wales, Sydney, exh. cat. pp. 2-3) 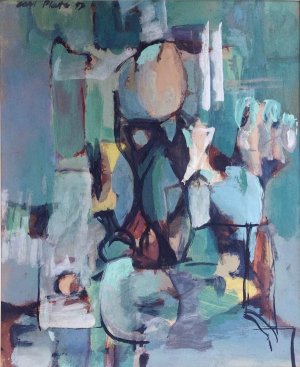