"Galbraith's pictures are three dimensional reliefs, painted on paper, mounted onto balsa wood and arranged in a two dimensional picture plane. Once composed and encased in a framing border, the pictorial space is visually penetrable; diagonal planes intersect and juxtapose on another, connected by an intuitive, rhythmic structure that unites disparate elements into a visually cohesive arrangement....

While Australian modernism provides a local historical context for his practice, Galbraith's reputation lies outside the rhetoric and categories that have largely defined Australian art in the post war period. As such, his work retains a timeless immediacy and freshness, the spatial conversations contained within each construction documenting something of the artist's evolving thoughts, judgements and technical approach." (F Fenner, W Wright, A Larkin 'Introduction' in Anthony Galbraith - A Retrospective, Sydney, 1998, p. 4) 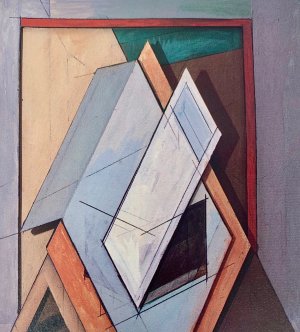