"No artist of her generation has been a more committed and thoroughgoing abstract painter. Ever since she emerged as a distinctive artist in the late 1960’s, Dumbrell's work has had the impersonal exhilaration found in the best abstraction of recent years.  Her rhyming compositions which began with strongly optical formats have moved steadily towards a freer, more open way of working.  The rhyming elements are still there but the construction of the pieces has become more intricate, more dependent on moment to moment inspiration.

The chief agent of that change was the transformation of her palette over the past three to four years.  She had started out relatively austerely, working through tonal colour where balances of light and dark were as important as the interaction of hues, but recently the intensity of the hues – lustrous blues and purples together with sharp and rich warmer colours – have mattered increasingly to her.  Under their impact, the formats had to loosen up.  The result was an art of extraordinary decorative power although Lesley Dumbrell is too purposeful an artist to let decoration decline into mere pattern-making.  As her palette bloomed so did her artistic personality.  Her brilliant decorative watercolours of the early 1980s onwards had an internal pulse, a visual throb as she allowed one colour to vibrate against another: they had their own voice." (Patrick McCaughey https://www.lesleydumbrell.com/home-page/writing/colour-and-transparency-national-gallery-of-victori... ) 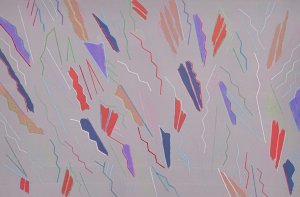