Design for an outdoor landscape I & II (2017) is a related work to Tony Clark’s Myriorama body of work, a project of more than three decades that the artist began in 1985. Literally meaning “ten thousand scenes”, Myriorama was first coined by the English artist John Clark (no relation), who created a series of landscape cards that could be conjoined or arranged in any order to create new views and combinations. With just 16 cards, a staggering 28 billion unique combinations could be created along a shared horizon line or in disjointed grids, a pursuit which became a popular children’s game in the early nineteenth century.

The two panels of Design for an outdoor landscape I & II are self-appropriations, reusing the compositions of two panels from Landscape 1992-94, a 72-panel myriorama work in the collection of the National Gallery of Victoria, Melbourne (below, with detail). Instead of the broad, continuous brushstrokes that characterise that work, Clark enlarges the composition and breaks it apart into short brushstrokes that resemble ancient Roman mosaic. 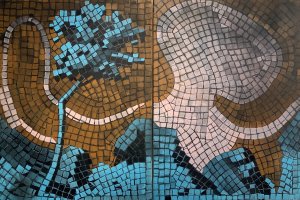