Provenance
Sullivan+Strumpf, Sydney
Acquired from the above circa 2010


"Arlene TextaQueen sees the world vividly. In her work, the world we know and the world of the artist’s friends and community is condensed, distilled and made more. More colour, more detail, more life, more flesh, more character." (Rodney Forbes https://www.monash.edu/muma/exhibitions/offsite-and-touring/2010/arlene-textaqueen-naked-landscapes-...)

I liked it so much I padded it down with a bandage and it grew back comes from the broader TextaNudes body of work. Like all works from the series, TextaQueen’s use of the Texta pen playfully takes a child’s medium and elevates it to the gallery wall. At the same time, the cartoonish lines and at times gaudy colours aim to provoke and seize the viewer’s attention, highlighting the joyful, outlandish and outsider nature of queer culture and politics. But the careful mark-making contrasts with that impression of childhood, with parts of the surface resembling the grain of wood. 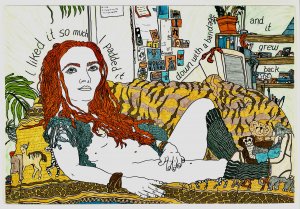 ☆ Add to wishlist
TextaQueen (b. 1975; formerly Arlene TextaQueen) is a contemporary artist of Indian heritage who lives between New York, USA, and Carlton, Victoria, and works on Boonwurrung and Wurundjeri Country, Victoria. Best known for the decades-long TextaNudes project, in which the artist renders women, queer and trans performers and artists in felt-tip texta pens, TextaQueen – who uses they/them pronouns – celebrates LGBTQI+ icons and culture in provocative works that challenge mainstream notions of representation in contemporary society.

However, more than this, TextaQueen’s aim is not to confront as such, since the intended audience is like-minded people who accept the premise of the work. As TextaQueen put it in a 2019 interview with Liminal magazine: “I don’t make my work to be confrontational—if someone finds it challenging, it wasn’t made for them. I make the work for the people it resonates with, who don’t need to be challenged by it.”

TextaQueen has exhibited extensively in Australia and internationally with over 20 solo exhibitions since 1998, including the survey exhibition Between You and Me, Mornington Peninsula Regional Gallery, Mornington Peninsula, Victoria (2017). Collections featuring TextaQueen’s work include the National Gallery of Victoria, Melbourne, the National Portrait Gallery, Canberra, and the Art Gallery of Western Australia, Perth.