Provenance
Bellas Milani Gallery, Brisbane
Acquired from the above

Exhibited
The Content of these Paintings is Secret, Known Only to the People of Surfers Paradise: Scott Redford and the Gold Coast, Gold Coast City Art Gallery, Queensland, 25 June – 7 August 2005, curated by Brett Adlington

Literature
Brett Adlington (ed.), Scott Redford And The Gold Coast - The content of these paintings is a secret, known only to the people of Surfers Paradise, 2006, Gold Coast Art Gallery, Queensland.


Motel State (2005) comes from a group of sculptures that Scott Redford completed in the mid-2000s inspired by old-style motel, cinema and advertising signs – the type common in Las Vegas and the Sunset Strip of Los Angeles. Redford co-opted these designs and applied a Queensland touch, localising the references. From the pejorative nickname of "Brisvegas" for Queensland's capital, through to the stereotypes associated with the Gold Coast, Redford at once celebrates and skewers these cultural tropes in these playful, miniaturised signs.

Redford interpreted the appeal of Las Vegas as follows: "What attracts me is that no matter what is said about it, it will always exceed and disappoint our expectations. It is a sort of rebus or mirror. It can be projected onto and reviled. It is both beautiful and a whore. Utopia and dystopia. You get the picture? I think it is ART." (Scott Redford: No Place Like Home, Institute of Modern Art, Fortitude Vallery, 2006.) 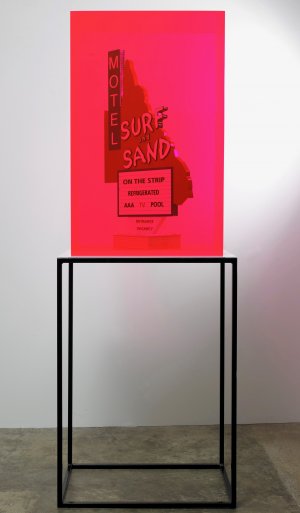 ☆ Add to wishlist
Scott Redford has held more than 50 solo exhibitions since 1986 in Australia. With works filled with cultural allusions and borrowings, Redford has spent decades creating works that concurrently present the beauty of Australian kitsch while also interrogating what exactly it is that makes certain tropes of popular culture so ineluctable. In 2003, Redford received a survey, 1962: Selected Works 1983-1992, University of Queensland Art Museum, Brisbane, and, in 2007, the Art Gallery of New South Wales, Sydney, staged Scott Redford: Blood Disco.