Peter Hutchings, 'Hegel after Warhol: Stephen Bush and the spirits of the age', in Blackwood Skyline: Stephen Bush; work in
progress #5
, Melbourne, 2003, p.5


This big in the afterlife (1990) comes from an early body of work in which Bush deployed the compositional and stylistic tropes of pre-modern United States art in ironic reflections upon colonial ways of seeing. Exhibited in Claiming: An Installation of Paintings by Stephen Bush, Australian Centre of Contemporary Art (1991), each painting contained self-portraits of the artist in absurd and anachronistic scenarios. In This big in the artlife, Bush is both an heroic figure – described by Naomi Cass in the catalogue essay as "the general, the patron, the owner, the artist, the leader, the actor, the president" – and the supplicants at his feet.

In Bush's classic play of repeated paintings, a further composition, This big in the afterlife, too (1992, Art Gallery of Western Australia), shows the same composition and characters recast as frontiersman or explorers. 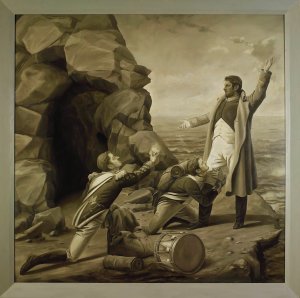 ☆ Add to wishlist
Melbourne-based artist Stephen Bush has been exhibiting since the early 1980s and his unique style and seductively surreal sensibility has earned him a place as one of Australia's leading contemporary painters. Bush is perhaps best known for his captivating The lure of Paris series in which - in muted tones of grey - the French children's character Babar the elephant is absurdly juxtaposed within sombre rocky shorelines that recall the Romantic notion of the sublime.

In more recent work however, this palette is broadened to deep pinks, greens, purples and blues. Merging disparate imagery including man-made structures, beekeepers, limestone caves and alpine mountains, Bush’s paintings take on a surreal twist as these recognisable forms merge with painterly swirls of abstraction, leaving the impression that the image itself is slipping away. Interrogating the inner psyche and the romanticised landscape, Bush's beautiful, chemically laced, post-apocalyptic scenes are evocative of both the past and future. By carefully constructing these complex worlds, Bush investigates the deep caverns of human existence with a heady exuberance and careful irony that inspires rather than deflates.