"Johnson can be an artist who argues with his own tenets across simultaneous mediums. In his studio there has always been at least five major disciplines at play: the structural drawings (rough as guts sketches scrawled straight on the wall or on scraps of paper), ink and watercolour calligraphy studies, crayon and gouache works on paper, small sculptures and found objects and then … the main paintings. All this and the random pages torn from science and nature magazines, alluding to animal fur, comets and frog spawn." (Anna Johnson, https://artistprofile.com.au/michael-johnson/) 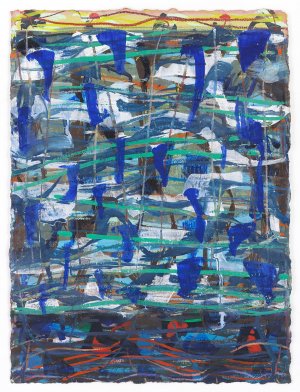