Provenance
Stills Gallery, Sydney
Acquired from the above by the present owner in 2015


Justine Varga's Accumulate series (2014-15) is a reflection on photography as a medium and the way it captures time, light and memory. Drawing on the writings of Roland Barthes, Varga explores the paradox of photography being a medium of captured light while all of its processes - from the darkroom to the film negative - are shrouded in darkness. In response to this contradiction,  Accumulate has some images that were made camera-less, with prints of blank negatives exposed for months at a time. Other images were made by applying tape to the film or leaving it in the rain to generate colour through chemical reactions. Remembering #17 shows a slow gradation of colour likely achieved through long exposure, with the perforations from the negative and text on the edges of the work revealing the process through which it was made.

As Varga wrote on the Accumulate series when they were exhibited in 2015, the works try to understand photography's strange place between reality and artifice, light and shadow: "Slowly but surely absorbing the gentlest ambient light, my photography knowingly deletes what came before. A shadowing follows and leaves its traces on film – a registration remains. It cannot be wiped nor recovered completely. It is someplace between being there and nothingness. It is the colour embedded within – a dull glow just beyond the surface. An echo of an image, it resonates to envelop the body in sight and sound." 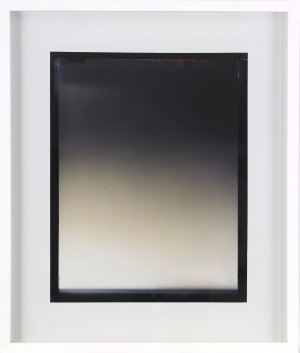