Provenance
Roslyn Oxley9 Gallery, Sydney
Acquired from the above by the present owner in 1993

Anne MacDonald's 1993 Ophelia series of photographs explores the themes of femininity, beauty, life and death. The specific source for the work is Ophelia's monologue in Hamlet (IV, v), just prior to her suicide, in which she lists a series of flowers and their associations to beauty, memory and time.

On the series, MacDonald has said: “To create Ophelia, I began by photographing an enormous bouquet of roses, irises, gladioli and lilies against a dense black velvet back ground. I placed the bouquet in a horizontal position as if cut down or fallen, to embody the traditional values of femininity; beauty, vulnerability, inferiority. The bouquet is by implication a female corpse. It is Ophelia’s bouquet and, at the same time, it is the drowned Ophelia.

I then separated and photographed the individual buds, blooms and petals from the bouquet. In the darkroom I manipulated the colour to give the flowers a dark and deathly cold blue cast. To further emphasise the funereal quality of the work, I framed the photographs in heavy black frames.

Inspired by the drowned Ophelia in Shakespeare’s Hamlet; Botticelli’s compositional strategy of compressing and scattering flowers; and the depiction of flowers floating downstream in Millais’ Ophelia; the installation Ophelia, is comprised of a large bouquet and singular buds, blooms and petals drifting and scattering across the wall, as if dispersed by the elements of water or wind.”

The entire Ophelia suite was acquired by the Art Gallery of Western Australia, Perth in 1993. 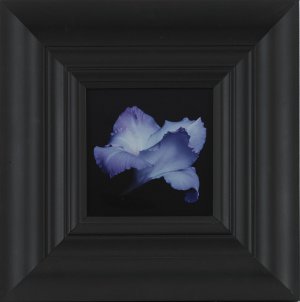 Image courtesy of the artist and Bett Gallery, Hobart