Around 2000, Norrie began to make images about human resilience, survival and hope. This was her response to the episodes of environmental and humanitarian catastrophe that she saw re-shaping the delicate ecosystems around us. These concerns took her to Tokyo in 2002 to document the cherry blossom season, which sprung earlier than usual that year. The imagery she sourced in Tokyo provided inspiration for this series of Cherry Blossom paintings, begun in 2011. The series is influenced by Marcel Duchamp and Andy Warhol and the many hats these artists wore.

This work combines photographic silkscreen painting, embodying repeated gesture and factory-like labour, and meticulous hand painting. Norrie sees multiple images, fast shutter speeds and ‘many frames per second’ as the basis of image making in our times: a direct reflection of how we absorb the world. Though she was working towards the power of the full series when installed in sequence, her images aren’t multiples. Each is unique and has been scrupulously made. The impossibly thick black stencil has been applied countless times and the hand painting is carefully nuanced. Norrie’s image belongs to the quick currency of the digital world, yet her meditation on how it is translated back to us, marries the fast and the slow: the quickness of media saturation and the stillness of artistic contemplation. 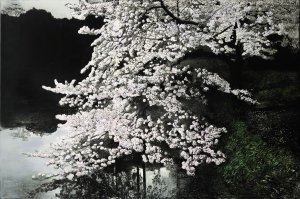