Nurturing the Fire, 2006, based on original photograph by Rob Scott-Mitchell
acrylic and wax on boards, archival inks on pure cotton photorag
162 x 150 cm (20 panels)
signed and dated ‘Lindy Lee/2006’ and with Roslyn Oxley9 Gallery label (all on the reverse)


Provenance
Roslyn Oxley9 Gallery, Sydney
Acquired from the above by the present owner in 2006

A ghostly head floats before a blackened background, eyes closed exuding a palpable sense of serenity. She seems to be simultaneously moving out and sinking further into the darkness around her. Cubes of deep orange are amplified against the cropped black ‘ink splats;’ an effective decision for an artist who considers orange as a symbol for luminosity.

Nurturing the Fire (2006) navigates minimal abstraction and figuration, as well as the infinite and the personal, in a manner emblematic of Lee’s prevailing fascination with paradox.  The work clearly builds upon her early appropriative photocopy practice. In the 1980s, as a young art student, Lee was enamored with the images of Old European Masters. Partly by chance, she began photocopying these images, a decision that would ignite her artistic career. As the child of an immigrant family, Lee identified neither as truly Australian nor Chinese. The photocopy was therefore a manifestation of her own sense of cultural illegitimacy.

The shadowy figure presented in Nurturing the Fire is the Chinese Buddhist Bodhisattva of Compassion, Kuanyin. She is the goddess that hears all the suffering in the world. The original photograph was taken of a Kuanyin figurine belonging to Lee’s family. Often small and transportable objects, Lee’s rendering enlarges the object’s features, heightening its sense of otherworldliness as a vessel for the goddess’s power.

Through her own family history, Lee’s artistic scope is broadened to explore themes of Zen Buddhism and the existential nature of being in the world.  Lee’s self described use of ‘paint splats,’ originate from her time in China learning calligraphy in 1996. Similar to her experience of the Old Masters, Lee struggled with the symbolic and cultural immensity associated with each mark. In an attempt to escape history in both a performative and artistic manner, she began splatting paint across her works. Lee would meditate, empty herself, let go of herself completely, and then fling the ink. For Lee, this cathartic gesture relies on a Buddhist metaphor: The Net of Indra, wherein the world is imagined as an infinite net: “At the intersections and the knots of this,” Lee explains, “is a little jewel… perfect in itself and perfectly reflecting the light of every other jewel in the universe. This jewel is symbolic of all phenomena. We can’t exist at an individual level without everything else existing at the same time.’[1]

So when Lee splats ink across an image, it is not herself as an artist making the gesture, but everything in the universe at the given moment, she is merely one part of that whole.  Lee’s practice is ultimately one that navigates and celebrates paradox. By both affirming and negating her agency as an artist, existential questions pertaining to the self and universe are explored as art becomes an interface where the material and non-material worlds collide.
[1] Edward Colless, The Art Collector Magazine, pp. 57 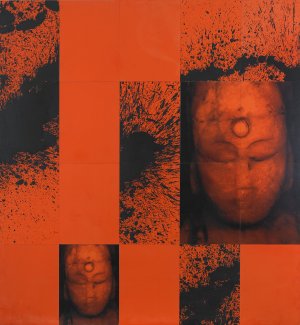 Image courtesy of the artist and Sullivan & Strumpf, Sydney