Design for a Mural Painting (1986) comes from a body of Tony Clark’s work from the mid to late 1980s where he began his ongoing exploration of the boundaries and histories of landscape painting. Beginning with an interest in the “sacro-idyllic” landscapes found in the ruins of Pompeii – history’s earliest extant decorative landscapes – Clark created small, postmodern oil paintings from around 1982 that borrowed heavily from the subjects and aesthetic of these ancient paintings.  From there, Clark began creating his own abstract paintings, titled playfully as designs for murals like the frescoes he had studied, but that were never intended to be realised as full-scale works.

The form in Design for a Mural Painting is architectural in nature, like a silhouette of an ancient Roman rotunda, but remains indefinite, the work as a whole rendered in paint that is splashed, dripped and sprayed onto the paper. 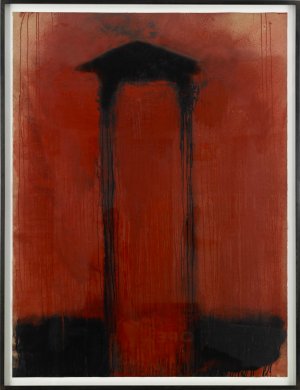