Provenance
Roslyn Oxley9 Gallery, Sydney
Acquired from the above by the
present owner in 1991


Clawed is perhaps the first bronze sculpture Bronwyn Oliver ever made. In 1989, Oliver was invited to undertake a residency at Meridian Foundry, Melbourne, the same bronze foundry that Robert Klippel worked with for his bronze sculptures. Not wanting to waste the opportunity and new to the possibilities of bronze as a medium, Oliver decided to practice by creating a wax object and taking it to a local foundry, Crawford’s Castings, Sydney. Clawed – or (Claw) – was the result, a curved, bronze form resembling a sea cucumber covered with raised barbs and a marbled patina.

The work was first shown at Oliver’s 1991 exhibition at Roslyn Oxley9 Gallery, Sydney, alongside copper and wire works of other organic, oceanic forms resembling sea snakes, barnacles and spiral shells. The work is a fairly rare foray into bronze for Oliver, whose work after this body of work, tended towards welded copper wire, with the exception of her very large aluminium commissioned work such as Vine at the Hilton Hotel in Sydney. 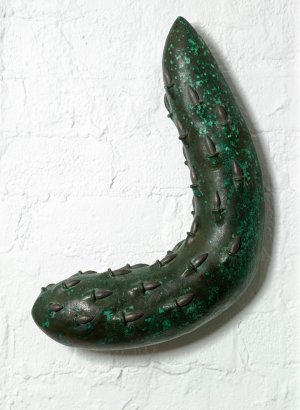 ☆ Add to wishlist
When Bronwyn Oliver enrolled to study painting at Sydney's Alexander Mackie College in 1977, a computer error assigned her to the school's sculpture department instead. A fortuitous glitch indeed, since the young artist was not only instantly taken with three-dimensional media, but also went on to become one of Australia's most significant sculptors.

Oliver was an artist of unique vision, and had an extraordinarily focused commitment to her practice. When she died in 2006 at age 47 she left a legacy of nearly three decades of outstanding work, including both domestic sculptures and ambitiously-scaled commissions such as 'Vine' which spirals 16.5 meters from the ceiling of Sydney's Hilton Hotel.

After graduating from art school in Sydney, Oliver completed her Masters of Art at Chelsea School of Art in London in 1983. In 1993 she was selected for the inaugural Beijing Biennale, and in 1994 she was the recipient of the prestigious Moet & Chandon Fellowship. Her signature organic metal sculptures are now held in most major public collections in Australia as well as many important national and international private and corporate collections. A significant retrospective of her work was held at the McClelland Sculpture Park and Gallery in 2005, and in 2006 Roslyn Oxley9 Gallery held the memorial exhibition 'Bronwyn Oliver 1959 - 2006'.

Oliver said of her art: "When the ideas, the formal elements and the medium all work together a sculpture will 'sing' with a kind of rightness. It takes on a life, a presence, which is removed from this world. It belongs to a mythical other life, without a place in time."