Acknowledged as one of Australia’s great twentieth century sculptors, Robert Klippel had an equally prolific and considered output of works on paper for the entirety of his career as an artist. From early abstract ink drawings in the 1940s to 1950s that prefigured and complemented his sculptural output, to abstract collages made of machine images he clipped from magazines and newsprint, through to painted and found coloured paper, Klippel thought of drawing and collage as a sculptural medium, integral to his overall creative vision and his love of assemblage.

Collage, 1993, is a late collage of painted paper that is both incredibly beautiful and unique in its scale. Klippel’s collages from this period are immediately recognisable for their bright colours, which mirrored the playful miniatures of polychromed tin that he created during the same time. While Klippel usually worked on a small scale, Collage is uncharacteristically large, making it a major work not just of this period but of his entire body of work as a collage artist.

As dealer Geoffrey Legge noted in the 1994 exhibition catalogue when this work was first shown, many of Klippel’s works use different sources, including coloured, glossy magazine paper, photocopies of these pages, or hand-painted paper “using, in the main, bold flat acrylic colours”. As Legge notes, there is a certain minimalism in Klippel’s collage works, as if these works were “about achieving more powerful images with fewer means”. This is true of his materials – much of which would have been recycled or otherwise discarded – as well as the subject matter, with a visual language of bright colours and loosely geometric forms to create the final composition. 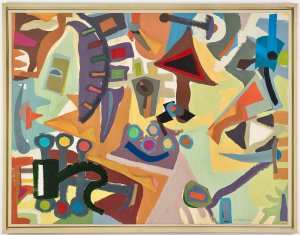