Untitled, 2000 is a major painting by Noel McKenna that was a finalist in that year’s Sulman Prize at the Art Gallery of New South Wales, Sydney.

At the centre of the work is a large birdcage around an eastern rosella. Small black finches sit at the base of the cage in the middle of a desolate landscape and gloomy sky. A single black cloud sits behind the immobilised bird, protruding from its back like an outstretched wing.

Domesticated animals – cats, dogs, horses and birds – feature heavily in McKenna’s work. As Art Gallery of New South Wales librarian Steven Miller has noted, McKenna’s depictions of animals “say something about our shared humanity, levelled in its affections and its vulnerability.” Set against a desolate background, void of any human presence, this painting reflects Miller’s observation that McKenna’s paintings “reflect worlds of loneliness and claustrophobia. But this is not all. There is hope; not derived from a vague feeling that everything will work out at the end, but rather from a choice about how one eventually makes sense of our untidy lives.”

In a sense, Untitled connected with McKenna’s broader interest in suburbia and domesticity, with the birdcage reflecting the same feeling of constraint or control of nature that is seen in his paintings of houses and neighbourhoods, as well as in his paintings of maps, in which McKenna draws attention to the human need to classify and take ownership of the land. Around the time of this painting, McKenna had just completed his Southland series of paintings from New Zealand’s remote far south, works that are more documentary than surreal, but share the same sparse, barren quality. The caging of the rosella – an Australian native bird – further reflects this human impulse to capture nature’s beauty, rather than to revel in it organically. 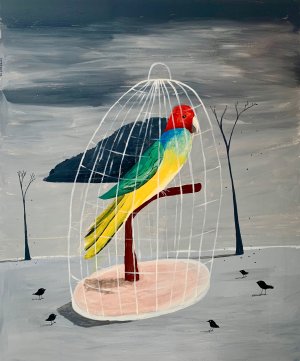