Literature
Included in the catalogue raisonné of Frank Hinder, managed by the Hinder Estate, available online at: https://www.frankhinder.com.au/artwork.php?id=11447


Aside from his practice as a painter, from 1935 Hinder began working as a theatre designer for productions across Australia and in the United Kingdom. Especially in the late-1950s and early 1960s, Hinder became a highly skilled creator of maquettes, drawings and designs for sets, costumes and lighting, many of which informed the broader theatricality of his art practice. He was involved in major touring productions of post-war theatre, including the seminal play about Italian-Australian race relations, The Shifting Heart, as well as major performances of Beethoven’s Fidelio, Wagner’s Lohengrin, and Shakespeare’s Julius Caesar and Troilus and Cressida.

Aside from theatre maquettes, Hinder began creating what he called ‘luminal kinetics’, highly intricate, playful, mechanical sculptures that played with light and colour. More broadly, Hinder developed an affinity with industry and architecture, resulting in semi-abstract constructions in the 1950s and 1960s that stepped beyond Cubism, as if each of his paintings or drawings was divided into strips of colour and light to be reconfigured by the artist’s eye. The Harbour Bridge, railway stations and trams are all key subjects in Hinder’s work, both for their geometric structure and the way in which light passes through these spaces in beams.

Murder in the Cathedral is a work on paper from 1960 that combines Hinder’s interests in movement, light and theatricality. Its title and subject is a play of the same name by T.S. Eliot, first performed in 1935, about the assassination in 1170 of Archbishop Thomas Becket in Canterbury Cathedral. In Eliot’s play, Becket foresees his own martyrdom, overcoming the temptations of physical safety or glory. He is eventually killed by four of King Henry II’s knights, who misinterpret the King’s frustration with Becket as an order to murder him. Hinder worked on the 1960 production of Murder in the Cathedral, performed at Bonython Hall, The University of Adelaide, South Australia, from 16 March to 26 March. The production was jointly presented by the Australian Elizabethan Theatre Trust and the 1960 Adelaide Festival of Arts, with Hinder as the sole designer.

In this work on paper, Becket stands in the centre of the composition, bathed in shards of light, and dressed in the distinctive red robes of the clergy. Approaching Becket are several shadowy figures, presumably the knights who believe they are under orders to kill him. The sharp, geometric forms in the work strongly resemble the shapes cast by spotlights on a stage, some of which can be seen directly in the upper left corner of the work. 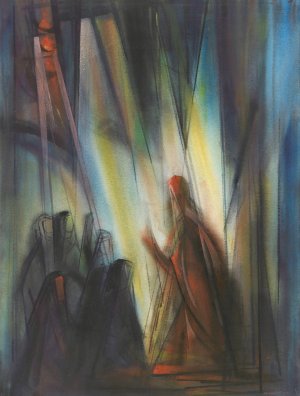