Dial (1966) is a hand-built stoneware ceramic that draws on Cycladic and Kytherian forms, as well as pre-Columbian pottery and sculpture. The form of the work is partway between a rounded vase and a human face, with a ridge down the middle of the work resembling a nose and a slit along the top of the work in place of eyes. There is a resemblance, at least in part, to surviving Cycladic figurative sculptures, drawing on Gazzard's family heritage. The likeness is brought out by the weathered texture that Gazzard achieves through hand-building and scratching into the surface before firing.

This work was owned by the Austrian-Australian painter Judy Cassab, and was perhaps exchanged for the portrait of Gazzard that Cassab painted in the same year, now in the National Portrait Gallery, Canberra.

Marea Gazzard was one of Australia’s best known ceramic artists and an influential figure in elevating the status of craft objects to the level of fine art. Born to Greek-Australian parents in Sydney in 1928, Gazzard studied at the Central School of Arts and Design, London (1955-59), where she was influenced by the hand-building ceramic techniques of British sculptor Ruth Duckworth, and the National Art School, Sydney (1953-55; 1961), where she was taught by Lyndon Dadswell, the same sculptor who taught Robert Klippel and Tom Bass. Her breakout exhibition came with textile artist Mona Hessing at the National Gallery of Victoria in a seminal show called Clay + Fibre (1973). The show was the first time ceramic and textile objects had received equal treatment as traditional works of art in a major Australian institution, provoking substantial debate on the distinction between arts and crafts. The legacy of that exhibition is a thriving and elevated crafts movement across Australia, with all major institutions having integrated ceramics, textiles, weavings and other objects into their collections. 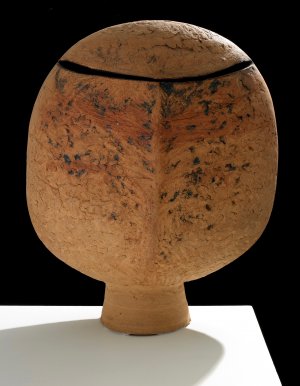