Provenance
Arc One, Melbourne
Acquired from the above by the present owner in 2014


Wonderland I is from a body of work made in 2014 when Guan Wei began experimenting with ceramics after travelling to Jingdezhen in Jiangxi provinece, often known as China’s ‘Porcelain Capital’.  The artist found within the medium a long and profound history that seems to hold meaning to almost all cultures and historical legends.

“Imagine 600 years ago, the fleet of a Chinese nagivator, Zheng He, arrived in Australia carrying a large amount of pottery and porcelain.  These voyagers met indigenous people and taught them to make pottery.  Could this have instigated the first Australian ceramics, prior to the early English settlers?  As a young artist in the late 1980s I came to this country, working primarily as a painter, and it is only now that I have embraced this medium.  With this body of work, there are three sections of imagined history, all stemming from a common heritage of ceramics.” (Guan Wei, October 2014 media release for Archaeology exhibition at ARC ONE Gallery, Melbourne, 2014)

Wonderland 1 plays with this concept of colonialism and heritage, combining imagery sourced from European, Chinese and indigenous Australian cultures.  However, rather than simply aligning with the East-West binary of a multiculturalist identity politics, Wonderland No. 1 uncovers a fresh perspective, creating a vision of cross-cultural exchange in which his lyrical human figures and mythological creatures from different cultures encounter each other with a sense of mutual curiosity, not dispossession.  While the scenes painted on the seductively curved surface of the vessel have a lingering sense of melancholy, the deliberately minimal inclusion of European ships and settlers presents less of an overt sense of menace than a liminal space in which there is an chance of either peaceful coexistence or a forceful imposition of control.

Rather than emphasizing the tension that often surrounds such cross-cultural exchanges, Wei offers with his work an opportunity for prosperous cultural interaction through a whimsical form of allegory: “I believe people need wisdom to choose from the many different cultural traditions that confront us everyday; knowledge is the key to open our minds to the diversity of the world; and humour is necessary to comfort our hearts.” (Quoted in Melanie Eastburn, ‘Wisdom, Knowledge and Humour, the Work of Guan Wei,’ in Guan Wei, Looking for Home, Earl Lu Gallery, LASALLE-SIA College of the Arts, Singapore 2000, p 12.) 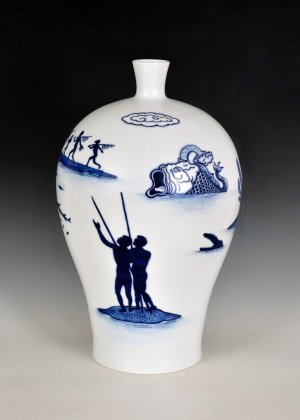 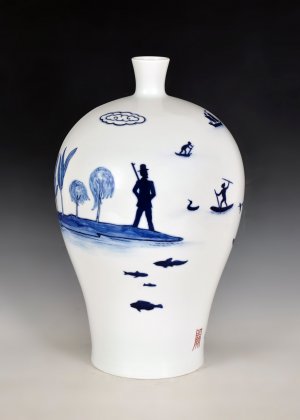 Images courtesy of the artist and Arc One Gallery, Melbourne