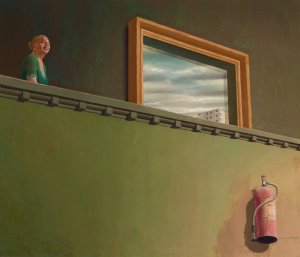 Portrait in the art museum comes from a body of work made in the mid-1960s when Smart lived and worked in Italy and briefly visited Spain. He likely began the painting while staying with fellow artists Paul Haefliger and Jean Bellette in Soller, Majorca, in the summer of 1965.  A rare interior scene from this period, the painting is distinctively austere, but balanced with a sense of visual play. The exposed and painterly surface of the green wall pushes the eye to the imperious figure looking down from the balcony and along the wall to the red fire extinguisher on the right.

The bareness of the scene is beautifully offset by the trompe l'œil effect of the painting on the wall that doubles as a window to grey skies and urban sprawl. Like the many road signs and hazard icons that recur in Smart’s paintings, the fire extinguisher (which appears again in a later painting, The Garage Attendant, 1981) draws attention to the aesthetic qualities of a paradoxically bright but easily overlooked object. The same could be said of the human figure in much of Smart’s work – a key element, but never quite the centre of the artist’s attention.

Like Edward Hopper in the United States, Smart was interested in the unbalanced relationship between human beings and the urban environment. Unlike Hopper, however, Smart’s subjects are all incredibly self-aware, posing in otherwise figureless settings and often staring right at the viewer. In this sense, Smart was highly attuned to the Italian zeitgeist in which he lived and worked. Paintings like this sit in perfect harmony with the cinema of Italian neorealist directors like Michelangelo Antonioni whose work was characterised by the desolation of post-war reconstruction and the lingering of the camera on a close-up or an establishing shot of the landscape. A highly studied and deliberate artist, Smart was an admirer of the compositional strategies of Piero della Francesca and the singularity of purpose from modernists like Morandi and Cezanne.

There are two preparatory sketches, both in the Art Gallery of New South Wales collection, that relate to this painting. The first is a 1964 pen portrait of Smart’s matronly and imperious housekeeper, Giuseppina. The second is a half-length portrait of Smart’s partner at the time, fellow artist Ian Bent. Bent joined Smart in Italy in March 1965 and was a willing model in several of his works from this period, either as the central human figure in the painting, or as the body atop which Smart would transplant the head of another person. In this case, Smart combined Bent’s pose with Giuseppina’s face, peering over the balcony of his imagined museum. In 2019, Portrait in the art museum was displayed with the two preparatory sketches in Jeffrey Smart: Constructed World, Art Gallery of New South Wales, Sydney.

Portrait in the art museum was an obvious favourite for Smart as he chose it as the cover for the catalogue of his 1966 exhibition at South Yarra Gallery, Melbourne. When it was first displayed, the woman wore a sleeveless black gown and the wall a lighter tone. Unsold from its first exhibition, Smart revisited the painting to encourage a buyer, amending the woman’s dress to be sleeved and bright green and repainting the front wall to match. While such a large amount of green is rare across Smart’s oeuvre given the dominance of the built environment over nature, Smart’s works in the 1960s often featured green shadows or skies, as well as fields of grass around urban developments or as the setting for a reclining male figure.

Image courtesy of The estate of Jeffrey Smart