Provenance
Roslyn Oxley9 Gallery, Sydney
Acquired from the above by the present owner


Lindy Lee’s conceptual interest in appropriation derived from her sincere admiration of the European Old Masters, including Jan Van Eyck, El Greco and Eugène Delacroix. At the same time, Lee was inspired by the minimalism of Dan Flavin’s fluorescent tubes and the colour fields of abstract expressionists like Ad Reinhardt and Mark Rothko. As an ethnically Chinese Australian artist falling under the influence of Europe and North America, Lee’s practice is a fascinating reconciliation of these often conflicting influences to produce a unified body of work.

Lee’s technical breakthrough came in the 1980s when she began to use a carbon photocopier to reproduce famous works by the Old Masters. Lee was drawn to the “incredible velvety materiality” that the granular, imperfect and smudge-prone copies would produce, especially after multiple layered printings. These striking works are noteworthy for the depth of black that they achieve, added to by streaks of dripping ink and the bright red ground, the overall effect being like a photography darkroom.

In 1987, Lee moved from the copier to the projector, creating paintings out of oil and wax that recreated canonical works of art in black and red or cobalt blue. Starting with a bright red underpainting, Lee would coat the canvas in black wax and carve out the image from the canvas, revealing the work in an act of excavation. In this way, Lee inverted the traditional act of painting by creating an image from negative space.

The Battle of the Giaour and the Sultan is an appropriation of Eugène Delacroix’s 1835 oil painting, Combat of the Giaour and the Pasha, in the collection of the Petit Palais, Paris. Delacroix took the story from Lord Byron’s poem, The Giaour, A Fragment of a Turkish Tale (1813). After learning that his slave and lover, Leila, was having an affair with the Giaour, Pasha Hassan killed Leila in anger. This image depicts the Giaour’s revenge, killing the Pasha in combat on horseback. The story is a classic Romanticist tale, with the additional political relevance of the Giaour (an Arabic term for “infidel”) overthrowing a Turkish military leader, exactly what Romantics like Lord Byron did when they fought for Greece’s independence from the Ottoman Empire in the 1820s. These themes of revolution, revenge and the depiction of “the Other” run through Lee’s work as a whole. 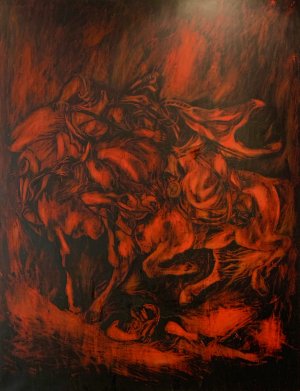 ☆ Add to wishlist
Lindy Lee has been a prominent Australian artist since the 1980s. Her earlier work used copies of European master paintings; images often studied in art schools through reproductions presented on slides or within the pages of a textbook rather than by encountering the original. Initially she developed these images on canvas, projecting the images onto a wax and oil surface, scraping back the minimal painting to reveal the Master image.

Lee then reworked fragments of such imagery by repeatedly photocopying segments, such as a female face, from the larger image. A feature of the work is the arrangement of the photocopies in succession, with dense blocks of vibrant colour against the deep black impressions from the photocopy process. With these early images, Lee challenged the accepted value of the great master paintings and propositioned the viewer to consider notions of the copy, value, identity and recognition. As an Australian with Chinese ancestry, Lee began her career with explorations of European imagery and thus the occidental aspect of her identity but by the 1990s she moved to Chinese and Zen Buddhist imagery, exploring her Asian identity. More recently, Lee has employed Buddhist methods for image making as a process for exploring chance.

Lee lives in Sydney and is represented by Roslyn Oxley9 Gallery, Sydney and Sutton Gallery, Melbourne