The Peripherique series (1989) was named after the ring-road that encircles Paris’s inner city limits. Notorious for its confusing signage and its chaotic turnoffs and routes, Norrie’s paintings reflect the sense of being stuck on the outside, looking in on a central truth that remains tantalisingly out of reach. Completed only a few years after the death of her parents, Peripheriqueuses a quote from a Hallmark greeting card – “Have a Rainbow Day” – in a darkly ironic fashion. Stencilled onto the canvas in thick layers of paint, Peripherique has a sculptural quality to it. The decision to paint the whole work in white reflects the loss of innocence or purity, a theme to which Norrie frequently returns in her paintings.

Peripherique (Rainbow Day) is a perfect reflection of what Victoria Lynn, curator of the Art Gallery of New South Wales’s 1994-95 survey of Norrie’s work, described as “the duel between the decorative and the decadent”. The inaugural winner of the prestigious Moet & Chandon Fellowship in 1987, Norrie spent time living and working in France and later in Italy. In this time, she continued to integrate the sublime with the profane (or the ridiculous), by elevating kitsch and cliché objects or phrases to the position of high art.

Other works from the Peripherique series – like Untitled, 1989 in the Art Gallery of New South Wales Collection – derive the texture and application of paint from the atmospheric effects of Turner or the Impressionists. But in Peripherique (Rainbow Day), Norrie quotes Pop and abstract expressionism, like the work of Jasper Johns, or the assemblages of Rosalie Gascoigne, so as to create a painting that feels sculptural or assembled. The use of stencilling refers in part to American post-war practice, but may also reflect the Japanese technique of katazome in fabric dyeing, which Norrie encountered in France as she considered the phenomenon of japonisme in her Objet d’Art series in 1988. This all forms part of Norrie’s reverence and deep engagement with the history of painting in all its forms. 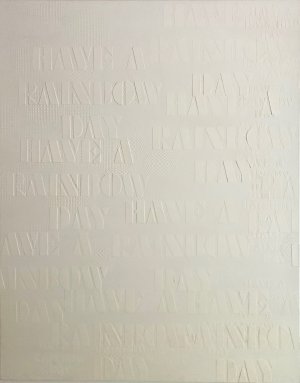