Provenance
Garry Anderson Gallery, Sydney
Acquired by the present owners from the above in 1986


Agnes Martin was one of the most significant abstract artists in twentieth century America.

On a Clear Day, 1973, falls auspiciously at the exact midpoint of Agnes Martin’s artistic career, connecting her various interests into one vital portfolio of prints. The series came about after a period of self-imposed exile from the art world in 1967 when she moved from New York to New Mexico.

As she contemplated her return to art making, Martin sought to distance herself from the chance effects of action painting, shifting her focus to a form of abstraction where “the end state of painting is known prior to completion”.[1]

Printmaking proved the perfect medium to engage this vision. In 1971, Robert Feldman from Parasol Press approached Martin about making a portfolio of prints; in 1973 she travelled to Stuttgart, Germany, to create them. Kathan Brown, the printer of On a Clear Day, recalled that Martin “wanted the printer to straighten out her lines, which she said she could never paint straight enough.”[2] For this reason, she opted for silkscreen printing over etchings (Feldman’s preferred medium) to attain the maximum possible clarity in the image. The finished portfolio contained thirty prints of variegated grids in crisp, grey lines. The title came from a 1970 film of the same title by Italian-American director Vincente Minnelli.

Reflecting on the series shortly after it was printed, Martin gave the following introduction: Art work that is completely abstract – free from any expression of the environment is like music and can be responded to in the same way. Our response to line and tone and color is the same as our response to sounds. And like music abstract art is thematic. It holds meaning for us that is beyond expression in words.  These prints express innocense [sic] of mind. If you can go with them and hold your mind as emty [sic] and tranquil as they are and recognize your feelings at the same time you will realize your full response to this work.[3]For Martin, the grid held a deeply symbolic spiritual intensity: “When I first made a grid I happened to be thinking of the innocence of trees and then this grid came into my mind and I thought it represented innocence, and I still do, and so I painted it and then I was satisfied. I thought, this is my vision.”[4]

In the mid 1980s, Sydney art dealer, Garry Anderson (who died in 1991) pursued Agnes Martin for an exhibition of her works, which she finally agreed to in 1986. The exhibition included a small group of ink drawings  on Japanese paper, of which only one sold to James Fairfax. There was also a small group of prints from the On a Clear Day series, of which these are two from that exhibition.  In 1987, Garry Anderson visited Agnes Martin, for four hours at her home in New Mexico, describing it ‘as the most wonderful experience’ (in a letter to artist friends dated 13 June 1987). 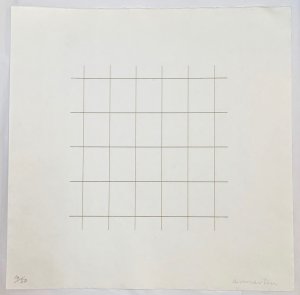