Despite the impression of working to a grid, John Young’s work embraces what he called in his Propositions for the Polychrome Paintings (1989) “irregularities, anomalies, mistakes…such as the coarse surface, the precarious lines, blotches of colour”.

This work was first shown in 1991 at Yuill/Crowley, Sydney, in an exhibition titled Bad Faith Realism, an express reference to Young’s disdain at the direction of the art market and the over-influence of economic factors on curators and public collections. Inspired directly by the performative repetition of On Kawara, Young’s  Polychrome works define anti-consumerist sentiment in a visually coherent language of colour, grid and line.

In many respects, the Babysitter Series (Unique Chance Paintings), 1991, are the crowning monument to his Polychrome project. Beginning with grids of hundreds of colours, the Babysitter paintings include just eight rectangular sections, all extracted and magnified from existing Polychrome paintings. Drawing on Baudrillard’s notions of “hyperreality”, Young’s playful and self-referential practice encourages the viewer to reflect on the physical act of painting in series. 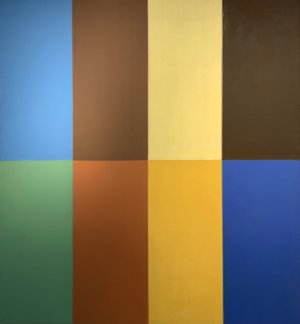 Young has been included in key historic surveys such as 'Perspecta '95' at the Art Gallery of New South Wales, Sydney, 1995 and 'Antipodean Currents, Ten Contemporary Artists from Australia', The Guggenheim, New York, also in 1995. He is represented by Philip Bacon Galleries, Brisbane.

'John Young' the artist's monograph was published by Craftsman House in 2005, with text by William Wright and Dr. Carolyn Barnes.