Inherent in Whisson’s oeuvre is a highly attuned artistic intuition, a studied but by no means mechanical relationship to colour and form that favours naïveté as the most honest way an artist can reconstruct the world.

Born in Lilydale, Victoria, in 1927, Whisson studied under the tutelage of leading Melbourne expressionist painter Danilla Vassilieff from 1945-1946. Building upon the strong history of figurative expressionism in Australian art, Whisson's intuitive paintings incorporate symbols, images and abstract marks to bring life to his surreal and uncanny understanding of the physical and metaphysical world. His practice of depicting multiple perspectives of a scene concurrently and flattening a sense of perspective or horizon speak to Whisson’s engagement with the same creative impulses of sources as diverse as the Cubists to the still lifes of Giorgio Morandi.

Trees and Structures is representative of the deliberate naïveté and multiplanar compositions that define his unique mode of expressionistic landscape. Houses, trees and roads are totemically stacked atop each other, reconfigured in a way that removes any sense of perspective or horizon. The minimalist renderings of the trees and “structures” draws attention to how automatically the human mind will compute a particular assortment of shapes and colours as familiar forms like houses, lampposts and telegraph poles. Implicit in all of Whisson’s work is a game of intuition played with the viewer, in which he challenges us to interpret his expressionistic scenes with as little information as possible. 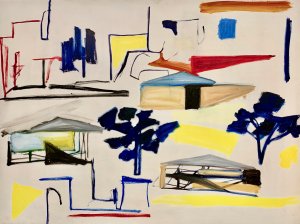 ☆ Add to wishlist
Ken Whisson was born in Lilydale, Victoria, in 1927. After attending Swinbourne Technical College from 1944-1945, Whisson studied under the tutelage of leading Melbourne expressionist painter Danilla Vassilieff from 1945-1946. Whisson's intuitive sketches incorporate a combination of symbols, images and abstract marks to convey an imaginative interpretation of the artist's experiences and understanding of the physical and metaphysical world.

Widely regarded as one of the most important Australian painters of his generation, Whisson has lived in Perugia, Italy since 1977, but has continued to exhibit regularly in Australia. In 1987 Whisson was awarded the prestigious Visual Arts Board Emeritus Award for substantial contribution to Australian Art, and his work is held in collections around the world including the British Museum, London and the Chartwell Collection, New Zealand, in addition to all major Australian public museums. Whisson is represented by Watters Gallery, Sydney and Niagara Galleries, Melbourne.