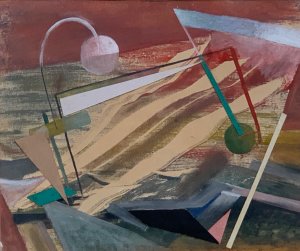 ☆ Add to wishlist
Frank Hinder was one of Australia’s most important and distinctive artists of the 20th century with a body of work that sought to find harmony between the abstract and the representational.

Born in Sydney in 1906, Hinder travelled to the United States in the 1920s, where he studied at the Art Institute of Chicago School and the Parsons School, New York. There he was drawn to abstraction, modernism, and the mathematical-aesthetic theory of “dynamic symmetry”, all of which would inform his own inimitable style. Whilst in the United States, he met and married the sculptor Margel Hinder (née Harris), and the two settled in Australia permanently from 1934. Upon their arrival in Sydney, the Hinders befriended and worked alongside the likes of Grace Crowley, Rah Fizelle, Ralph Balson and Gerald Lewers, all of whom resisted the institutional conservatism of the Sydney art scene which, at Robert Menzies’ behest, had coalesced into the short-lived Australian Academy of Art.

From 1935 Hinder began working as a theatre designer for productions across Australia and in the United Kingdom. Especially in the late-1950s and early 1960s, Hinder became a highly skilled creator of maquettes, drawings and designs for sets, costumes and lighting, many of which informed the broader theatricality of his art practice. He was involved in major touring productions of post-war theatre, including the seminal play about Italian-Australian race relations, The Shifting Heart, as well as major performances of Beethoven’s Fidelio, Wagner’s Lohengrin, and Shakespeare’s Julius Caesar and Troilus and Cressida.

Aside from theatre maquettes, Hinder began creating what he called ‘luminal kinetics’, highly intricate, playful, mechanical sculptures that played with light and colour. More broadly, Hinder developed an affinity with industry and architecture, resulting in semi-abstract constructions in the 1950s and 1960s that stepped beyond Cubism, as if each of his paintings or drawings was divided into strips of colour and light to be reconfigured by the artist’s eye. The Harbour Bridge, railway stations and trams are all key subjects in Hinder’s work, both for their geometric structure and the way in which light passes through these urban forms, as in his Tram kaleidoscope (1948), acquired by the Art Gallery of New South Wales, Sydney, in 2013.

Frank Hinder died in 1992 aged 86, leaving behind a defining body of work for Sydney modernism. In 2011, Renee Free and John Renshaw wrote The Art of Frank Hinder, published by Hinder's daughter, Enid Hawkins, and Philip Mathews Book Publishers. Hinder exhibited for nearly six decades in his lifetime and his works have entered all major public collections in Australia. His most recent retrospective was Frank Hinder: a study in dynamic symmetry, Art Gallery of Western Australia, Perth (2008).