Susan Norrie’s The Sublime and the Ridiculous is in equal parts a homage to and a deconstruction of academic painting, Romanticism and consumer culture. The subjects in the work are all twists on the visual clichés of the Gothic by way of classic horror films: ghoulish faces, widely compared by critics to Frankenstein’s monster; damsels in white, dripping with blood; and religious architecture and iconography.

“Norrie’s The Sublime and the Ridiculous, 1985, was an encyclopedic compendium of visual clichés from Old Master paintings in museums and from B-grade horror movies. Everything was either flawed or a metamorphosed version of something else.” (C Green, op.cit.,p. 87)

Norrie’s inclusion of a cathedral serves the same function as her renderings of Mickey Mouse and other icons of popular culture – each image from high or low culture is an artifice, behind which is a cold or empty reality. Yet, Norrie’s execution of the painting reveals a deep understanding and reverence towards the techniques of the Old Masters, even if she does not believe in their artifice.

Painted shortly after the death of family members, the work can be seen to reflect the artist’s grief through tormented and wilfully ghoulish images. Norrie, however, has always spoken of her paintings in a more sanguine fashion, as critiques of mass consumer culture using the techniques of academic painting.

This is one of two versions of The Sublime and the Ridiculous executed by Norrie in the same year, the larger of which is in the National Gallery of Australia collection. Both versions of the work were made for Australian Perspecta ’85, with one being exhibited at the Art Gallery of New South Wales, Sydney and the other at Artspace, Sydney.  The works were reunited in 1994 for a survey exhibition Susan Norrie held at the Art Gallery of New South Wales and curated by Victoria Lynn. 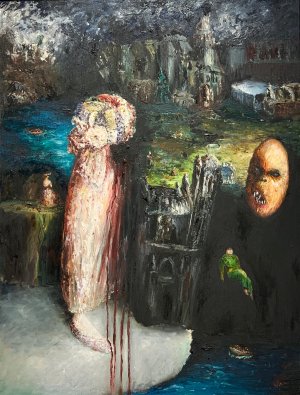