The artist and critic Elwyn Lynn wrote in 1969 of Plate’s Monument works that with them he aimed “to flatten the ‘void’ and re-activate it by centrally placed loose shapes. Though he abandoned the serialization of shapes, he preserved the clean, neutral ground.”

Chance elements appear in the work in forms that resemble torn paper, no doubt a reflection of the collages that Plate so regularly used in place of conventional preparatory sketches. The result is a vibrant, animated abstraction, with the cool, oceanic palette, absence of straight lines and use of negative space creating an image that is fluid but cleverly composed. It comes at an important time in Plate’s overall oeuvre when he had just returned from Paris on a residency funded by the Power Institute, University of Sydney, around which he produced a body of work that then critic at the Australian Laurie Thomas described as “controlled and disciplined, the work of a mature artist who has spent his life creating a language which he now uses with authority, sparely and coolly.” 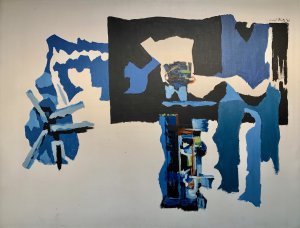