Provenance
Roslyn Oxley9 Gallery, Sydney
Acquired by the present owner from the above on 5 July 2003


In 1990, Bill Henson was commissioned by the Paris Opera House to produce a series of photographs inspired by the culture and atmosphere of the Opera. Henson’s response was to photograph the audience. Visiting the three great Parisian Opera Houses several times over the year, he made a series of photographic sketches. In his Melbourne studio, he restaged and directed these images to capture and accentuate the sublime attentiveness with which we watch a stage performance. Henson’s treatment of the subject is so finely evocative, Australian art historian and curator Gael Newton was moved to write ‘his figures are passive but, in losing themselves, seem to live more intensely.’

Alluding to the chiaroscuro lighting of sixteenth century European masters, these subjects sit in darkness, their features heightened by the dramatic glow of stage lighting. Bordering on the painterly and the cinematic, Henson combines surface and depth to reflect a liminal space between the mystical and the real. The French painters, with whom he so often blends his palate and velvety-rich tones, are easily accessible in this world of the Paris Opera.

‘The evocative portrait series Paris Opera Project brings a strangely discontinuous space to the viewer. Part of a much larger series, the portraits play out the drama of opera as if in five acts. Moving from a moody landscape in half-light to a young girl who lifts her hand to grasp the darkness, the inky blackness of the theatre leads us through the other portraits of opera viewers deep in concentration. The final image, like the first, is a fuzzy landscape, where a barely discernible hill of trees is mirrored by trailing clouds, the space between reflecting the shimmering night sky. Like video artist Bill Viola, Henson chooses not to show the action of the stage but rather the audience in full devotional contemplation. Often likened to painting, Henson's artistic process is not unlike the painter's struggle: 'just as you can scrape back areas of painting and go over them, you do follow something along over maybe several weeks and change things until it slips past its best point and you lose it. And then there's a long, often a very long, period when the work is turning into something else - you can't wind it back to whatever it was.' (Sebastian Smee in conversation with Bill Henson (1994) in Bill Henson, Mnemosyne, Art Gallery of NSW, Sydney/Scalo, Zurich 2005, p 440) 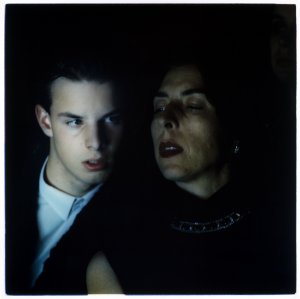