Provenance
Darren Knight Gallery, Sydney
Acquired from the above by Dr Colin & Elizabeth Laverty in 2001


Louise Weaver’s multidisciplinary practice fuses textile art with printmaking and sculpture to produce fantastic reflections of the natural world. She is perhaps best known for her textile taxidermy, woollen animals that are playfully crocheted with highlights of tinsel, faux fur or glitter. Her works are reminiscent of the magic and humour of the surrealists – especially drawing to mind Object, Meret Oppenheim’s fur cup and saucer. Sketch for an ice cave, 2000-01, retains some of these sculptural features, with hexagons of hand-embroidered thread catching the light, giving the work a sense of magic. Arranged in a geodesic dome, the embroidery sits atop a screenprint of a forest landscape represented not by the contours of trees but, rather, only suggested by the spaces between the trunks and the leaves. A subtle blending of media, the composition is literally held together by a thread, a powerful reflection upon the fragility of nature. 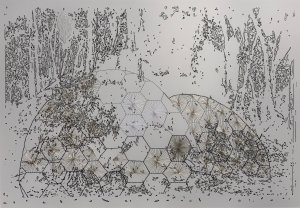 Louise Weaver’s work is held in major public and private collections across Australia, including the Art Gallery of New South Wales, Sydney, the National Gallery of Victoria, Melbourne and the National Gallery of Australia, Canberra, as well as the British Museum, London, and private, regional and corporate collections across Australia and internationally. In 2003, a monograph, Louise Weaver selected works – 1999 to 2003 was published by Scanlan and Theodore. Weaver is represented by Darren Knight Gallery, Sydney.