Richard Dunn’s Paintings after Albert Namatjira reveal painting to be not so much a vocabulary or language as a material experience, as much visceral as it is visual. With his work at the nexus of conceptualism and minimalism, Dunn’s appropriation of Australia’s most famous indigenous artist is not about replicating Namatjira’s sense of country or landscape per se. Rather, Dunn’s interest in the gorges, chasms and bluffs of central and northern Australia derives from how this original experience of the landscape leads to “the most abstract and ambiguous compositions” that the artist could imagine (Christina Davidson, The Future is Unwritten: Richard Dunn’s Paintings After Namatjira, 2011).

Dunn’s work borrows its composition from Albert Namatjira’s Redbank Gorge, a watercolour from 1936 that Dunn first saw at the National Gallery of Australia in 2002. Dunn was particularly taken by the gorge, which he has also visited, feeling that it lent itself as much to an abstract treatment as a representational one. His appropriations of Namatjira took two phases beginning in 2002 with eight paintings resulting. Dunn’s aim was not to reproduce the original landscape painting and its associated feelings of country and place but, rather, to study the formal elements of Namatjira’s original image. The resulting images takes the concept to a beautiful extreme, reducing the original image to a greatly limited palette and jagged colour fields. 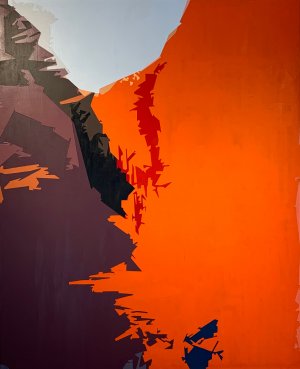 ☆ Add to wishlist
Richard Dunn (b. 1944) has held more than 50 solo shows and 100 group exhibitions over a career spanning nearly six decades. Most recently, he held a solo show, Haus Wittgenstein, Kundmanngasse 19, Charles Nodrum Gallery, Melbourne. His Namatjira paintings were exhibited in 2012 at the same gallery. He has been the subject of major survey shows at the Monash University Museum of Art, Melbourne (1994) and the Art Gallery of New South Wales, Sydney (1992). He has held recent solo shows in contemporary art spaces in Shibukawa and Nagoya, Japan (2014); and the Indira Gandhi National Centre for the Arts, New Delhi (2010). In 1984-85, Dunn was part of the MOMA PS1 International Studio Program, which led to a 1985 exhibition at PS1, New York. He has been a visiting professor at the National Academy of Fine Art, Oslo (2000); artist-in-residence, Kunstammlungen Chemnitz, Germany (2000); guest professor, Kunstakademie Dusseldorf (2003); and he was an External Examiner, Edinburgh College of Art, University of Edinburgh.