Provenance
Sherman Galleries, Sydney
Acquired by the present owner in 2002


Rising Drift, 2002, is highly representative of Wolfhagen’s unique mode of representing Northern Tasmania. The earth tones carry a soft purple hue in the dusk light. Around the mountain in the foreground, the oil and beeswax is applied in thick, uneven strokes, resulting in vibrant glimpses of the red underpainting showing through the surface. The work is a diptych, another common feature in Wolfhagen’s paintings that the artist believes represents the flow of time from one moment to the next. 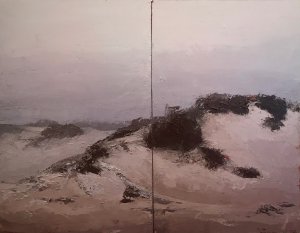 ☆ Add to wishlist
‘The spiritual quality in my work resides in the vanishing point on the central horizon. I cannot deny the ritualistic nature of the act of painting and the feeling of spiritual elation I experience when I achieve, in a passage of paint, what I had in mind and soul.’
Philip Wolfhagen

Born in Launceston, Tasmania in 1963, Philip Wolfhagen draws inspiration from the clouds, low mountains and fields of his native land. After studying in Sydney at the Sydney College of the Arts and University of Sydney in the late 1980s, he returned to Tasmania in 1996 where he continues to live and work to the present day.

For decades Wolfhagen has worked with oil and beeswax, applied in broad spreads of a palette knife, that lends his paintings a mellifluous sheen. His work is highly gestural, with areas of sky and water applied smoothly in direct contrast with mountains or clouds that rise to tactile peaks. The landscapes have a sense of mood and atmosphere reminiscent of the German Romantic painter Caspar David Friedrich.

Philip Wofhagen has been working and exhibiting for three decades with his work included in major public and private collections across Australia. In 2013, a survey of his work, 'Illumination: The art of Philip Wolfhagen', was exhibited at the Newcastle Art Gallery and the Tasmanian Museum Art Gallery, Hobart. In 2016-17, another survey, 'Transformations: The art of Philip Wolfhagen', was held at the Queen Victoria Museum and Art Gallery, Launceston, where he exhibited his large-scale six-piece painting 'Archipelago' in 2003. He has also been featured in a number of group shows, most recently Australia at the Royal Academy of Arts, London, the first exhibition of Australian art at the Royal Academy in 50 years. He was awarded the Wynne Prize by the Art Gallery of New South Wales, Sydney in 2007.