Clarice Beckett, against all odds, has become recognised as one of Australia’s major modernist painters. Maligned by the art establishment during her life, she was almost anonymous until the 1970s, when a resurgent interest in her paintings finally brought the recognition she deserved.

Beaumaris is a late landscape depicting the Melbourne bay that Beckett had visited since childhood. It features two of her common motifs: the sea, painted in a rich but dry blue; and the roof of a house, its orange tiles melded into a flat block. These passages of colour, along with the warm yellows and cool greens of the foreground foliage, fade into her characteristic gray, atmospheric haze. A comparable landscape painted from the same perspective, (Across the Bay), 1932, was included in the 1999-2000, touring retrospective, Politically Incorrect: Clarice Beckett, curated by the Ian Potter Museum of Art at the University of Melbourne. 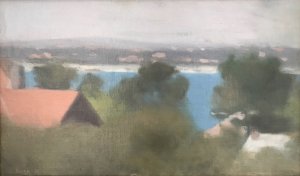 ☆ Add to wishlist
"[My aim is] to give a sincere and truthful representation of a portion of the beauty of Nature, and to show the charm of light and shade, which I try and set forth in correct tones so as to give nearly as possible an exact illusion of reality." - Clarice Beckett 1924

A part of Melbourne's 'Tonalist' movement in the 1920s and 30s, Beckett created atmospheric paintings of suburban streets around her local Beaumaris, a beachside suburb of Melbourne. These were painted outdoors in the early morning or evening. Around the age of 27, Beckett enrolled to study with Frederick McCubbin at the National Gallery School in Melbourne, later training under Max Meldrum. Beckett exhibited from 1917 to her death in 1935 and was known, but largely neglected as an artist during her lifetime. Her importance was recognised in the 1970s, when a large rural shed in Victoria was found with some 2000 of her canvases, two thirds of which had been destroyed by the elements.