This untitled triptych comes from his Untitled Sequence, 1983-84 and displays a number of the series’ distinctive motifs. On the triptych’s wings are views of galleries containing paintings by the Old Masters in European galleries. Deprived of their colour, Henson reflects on light and mood, the rigorous, highly spiritual paintings against the empty gallery space. The central image is of a naked young girl, a desolate figure flanked at odds with the images of cool, classical grandeur beside her. In his foreword to the series, author and publisher Michael Heyward wrote about the difficult relationship between subject and image: ‘The camera is an intrusive machine but no one in the photographs acknowledges any intrusion, no one amongst these shadows partakes of that self-consciousness which we, by definition, experience in viewing them.’ (Michael Hayward, Bill Henson: Photographs, Pan-Picador, Sydney, 1988, p. 44) 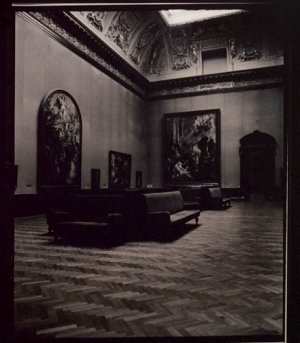 ☆ Add to wishlist
'Henson’s work is a celebration of the amoral. He makes no judgements, takes no positions, addresses no issues and yet reveals all manner of human instincts, intuitions and imaginings. His work and its inviting intrigue compel us to contemplate the imponderable and to wonder at the impenetrable. As such they are revelations of the imagination made seductively tangible but never fully complete or comprehensible.' (Edmund Capon on Bill Henson)

In 1995, Henson represented Australia at the 46th Venice Biennale with his unique and highly celebrated ‘cut-screen’ photographic works. In 2005, the Art Gallery of New South Wales, Sydney, staged a survey of Henson’s work that travelled to the National Gallery of Victoria in 2006 to unprecedented crowds. In 2006, too, he staged his second major international solo exhibition, Twilight, held at the Victoria and Albert Museum, London. In recent years, the Art Gallery of New South Wales held a show dedicated to his ‘Cloud Landscapes’, and in 2017 he showed at the National Gallery Victoria as part of their Festival of Photography.

Henson is represented by Roslyn Oxley9 Gallery, Sydney and Tolarno Galleries, Melbourne. His work is the subject of two extensive monographs Lux et Nox, 2002, and Mnemosyne, 2005, both published by Scalo, Switzerland.