In the certificate signed by Janet Holt, January 1991, she writes: 'In this quietly resolved work, Emily Kngwarreye defines the post-summer dryness that created a muted, scattered carpet of seeds and grasses over the country. Her life long observations of her place called Alalgura on Utopia Station have taught her that despite the dryness, those underground tuber vegetables are just right for picking. When the wind sweeps away the grasses and leaves bare country, survival becomes tough.

To look on Emily's work from an aerial perspective is necessary to understanding her view of her country.  In a layered approach with colour, we see sporadic clustered growth of plants in different stages of maturity. Knowledge about the life cycles of plants is learned in everyday situations and reinforced in ceremony. Ceremony asserts that the combined spiritual power of women assures fertility and future seasons for all desert life forms. Emily's role as a senior custodian means taking on the ritual and social responsibilities for her nieces. She teaches them much of what she knows, and deliberately influences their role within their tribal grouping. She uses her power to guarantee future generations and the continuous flow of her knowledge.' 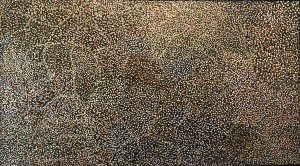 ☆ Add to wishlist
Emily Kame Kngwarreye emerged in the 1980s and 1990s as one of Australia's most important contemporary painters. Known affectionately just as “Emily”, Kngwarreye’s work garnered international acclaim in her lifetime and was instrumental in developing interest for Australian Aboriginal art both domestically and overseas. Heralded as a seemingly intuitive artist who came to painting and global attention late in her life, Kngwarreye’s art is better understood as the product of lifelong artmaking in the Anmatyerre traditions of drawing in the earth or painting onto bodies for ceremony.

Throughout her life, Kngwarreye painted her country, Alhalkere, north of Alice Springs, where she was born in around 1910. It was not until she was around 10 years old that she first encountered a white man, around the time that pastoralists annexed Alhalkere and neighbouring lands, naming the area “Utopia”. Kngwarreye was forced to work on these stations, tending for animals, leading camel trains to and from the local mines, and even working as a miner herself. At the same time, she became a ceremonial leader and Elder, continuing her people’s traditions and playing an instrumental role in successfully advocating for the return of Utopia Station in 1979 to Traditional Owners.

In 1977, Kngwarreye was one of 20 founding members of the Utopia Women’s Batik Group. She worked in this medium until 1988, when she transitioned to acrylic paintings. In 1989, Kngwarreye was awarded the inaugural CAAMA Fellowship, which began to move away from the conventional egalitarianism of the Batik Group by allowing Kngwarreye to flourish as an individual artist. In 1992 she was awarded the Australian Artists Creative Fellowship and major works began to enter Australian public collections with sellout shows of her paintings.