Provenance
Darren Knight Gallery, Sydney
Acquired from the above by the present owner


The focus of Blue Home, Nth Island, NZ lies on the symbiotic relationship between humanity and nature. The angular edges of the structure – delicately left as thin strips of negative space – are balanced against the absence of straight edges in the surrounding landscape. Both the built and natural landscape share a cool palette of green and shadows of rich ultramarine blue. The bright, illuminated window of the home hints at humanity’s presence inside the house, leaving the world outside in quiet harmony.  McKenna is a frequent traveller to New Zealand and has held solo shows in Wellington and Auckland. In 2012, he held a solo show Napier to Wellingtonat Bowen Galleries in which he documented his travels through the North Island. 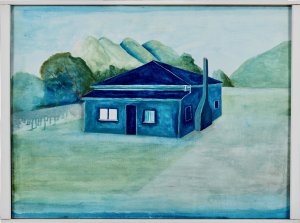