“…Not all her cloth towers are modernist, for Jubelin pulls into the equation a traditional Sydney
destination, the clock tower at Central Station, temporarily wrapped for
conservation. The cloth does not conceal so much as fleetingly modernise an
earlier era of civic architecture.

It is ubiquitous in a heritage-obsessed city that, like a cat, endlessly
cleans itself. An early sewing renders its sandstone tower, in a pair of
diamonds, naked clothed. In 2011, coinciding with a subsequent
bout of preening, Jubelin makes another double shaft. Though now in
white-on-white cotton, it stares blindly back like a pair of albino eyes…” (Narelle Jubelin: Vision
in Motion,
The University of Sydney, p.74.) 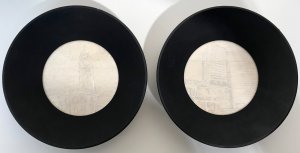