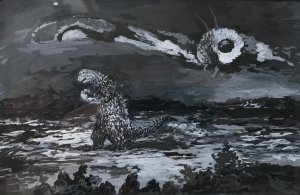 ☆ Add to wishlist
Susan Norrie's preoccupation with politics and the environment have always informed the subject matter of her work. From the feminist overtones of her earlier series 'Lavished Living', (1983-1984) and 'Objet D'Art' (1988); to her cynical comments on consumerism found in her series 'Tall Tales and True' (1986-1987) and 'Peripherique' (1989); to the more recent video works 'Undertow' (2002) and the geologically and politically volatile view of Indonesia documented in 'Havoc', seen at the 2007 Venice Biennale.

The beauty of all these works, whether it be painting, drawing, installation or video is Norrie's wonderful power over surface texture and material. The tactile quality of her surfaces, are often a contradictory experience to the harsh reality of the stories she tells.

From the moment Norrie began exhibiting in 1982, her work has been highly regarded for being both conceptually and materially advanced. It was the winning of the first Moet & Chandon prize for an artist under 35 that was a pivotal point in her career, and her work has been exhibited in many international and national surveys of contemporary art. Norrie's work has been written on extensively and is held in all state and most regional gallery collections of Australia.