‘A sense of enclosure in Watson’s work escalated with the series Bottled Memories (1987) which placed both images and texts inside distorted bottle shapes. The bottles refer back to the dreamlike shapeshifting in the Alice stories as well as relating to fairy tales such as the genie in the bottle, or to the tiny detailed worlds of ships in such containers. With the exit to the bottle constricted, there is solace and protection as much as confinement and claustrophobia.’ (Judy Annear, ‘Jenny Watson: Painter of the Mirror’, Paintings with Veils and False Tails Jenny Watson, Australian Pavilion 45th International Exhibition of Art Venice Biennale, 1993, p.17)

“In the early 1980s, at the height of the Art Projects movement, the theme of anti-art-as-object became a strong influence on artists such as John Nixon, Tony Clark, Ania Walwicz, Brett Colquhoun, Peter Tyndall and Jenny Watson. In the mid-to-late 1980s this devil-may-care attitude toward the artwork has changed as both cultural and fiscal value has been recognized within the works.

“I think the importance of ‘We use any materials, we will hang an unstretched canvas on the wall, we will use paints that won’t last a long time’ – I think that that was an essential, almost debunking, of the idea of what the painting, ‘should’ be made of. It was essential at the time, almost like punk music. Then of course once the gesture is made, I guess you then start to refine the language that you have created.’ “ (Jenny Watson quoted in Ashley Crawford, 'Jenny Watson’ Art and Australia, Autumn 1991, Vol 28 No 3, p. p.351) 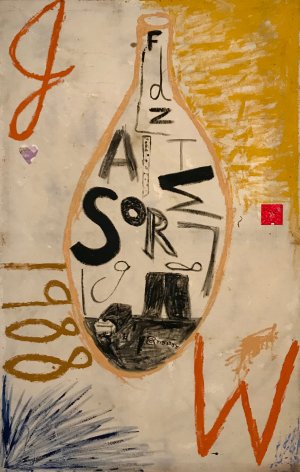 ☆ Add to wishlist
Jenny Watson was born in Melbourne in 1951 and lives and works between Brisbane, Australia and Europe. She trained at the National Gallery of Victoria Art School, Melbourne in the early 1970s. In 1993 Watson exhibited at the Australian Pavilion for the 45th Venice Biennale.